Got to go to PaizoCon for the first time this year, and it was a good time!  Some highlights:

Thursday: Woke up absurdly early to catch plane, to the sound of piteous cat meows.  She saw the suitcases and knew something was up.  Probably thought we were going to put her in a van and drive her around again like the TERRIBLE HUMANS we are.

Not much for official events on Thursday, but the partner-in-crime and I did attend the Wayfinder dinner for contributors, which was lots of fun.  Got to chat with some cool people and eat delicious food!

Friday: Friday’s agenda included the welcome panel, panels on monster and character creation, and a very helpful panel on writing for RPGs.  I also managed to snag one of the open appointments for career counseling with James L. Sutter, and came out of it with a lot of good advice (and the hope that I didn’t embarrass myself too much).  In the evening, I played in my first-ever Pathfinder Society game with a first-level investigator.  Almost died in the final fight, but managed to stabilize before I bled out and got patched up after the others won.  (Thanks, kineticist dude!)

Since I’ve only ever played home games before, PFS was an interesting experience.  I’m generally a lot more comfortable playing with people I know, but my table was pretty cool.  On the whole, I think I still prefer home games for the greater flexibility and familiarity with the other players and PCs, but maybe I’ll look into playing a PFS game or two around here occasionally.

Saturday: Saturday began with a Citadels game led by Jessica Price, which was a lot of fun.  I attended panels on Lovecraft in Pathfinder, the future of Paizo, secrets of Golarion, and the Pathfinder adventure path Q&A, where they revealed a lot more details about the upcoming AP after Strange Aeons, Ironfang Invasion.  It sounds like the kind of path where I might finally have the chance to play the hunter + polar bear companion idea that I’ve been kicking around, though it might still be a bit too far south…

We hadn’t initially planned to go to the banquet, but ended up impulse-buying tickets after the Future of Paizo panel hinted that a lot of things would be revealed there…and they definitely were right about that.  They announced a lot of cool stuff, but the biggest announcement of the evening was Starfinder, a space-opera type of setting thousands of years in the future.  Being the giant nerd that I am, I immediately started wondering how I would stat out Cordelia Naismith Vorkosigan–so I guess I know what my first Starfinder PC will be themed around!

Sunday: On Sunday, I started off with a panel on intrigue in Pathfinder, since I love me some urban, political-scheming types of plotlines.  Got some good ideas on how to make use of the new intrigue rules in game.  After that, the partner-in-crime and I hit up the Horror Adventures preview.  He loves horror something fierce–had to talk him down from trying to make off with the copy they had with them.  🙂  Panels on homebrewing things and freelancing were next on the agenda, which were both quite interesting.  Finally, we played in the Serpent’s Ire event in the evening, which was fun.  I immediately nabbed the doppelganger mesmerist to play, as shapechangers are my jam.  (I once played a 3.5 changeling in a Pathfinder campaign set in Eberron.  Shapechanging shenanigans are best shenanigans.)

We had to leave for the airport early Monday morning, so we didn’t get the chance to do any of the Monday events.  Next time, we’ll have to take an extra day or two off work so we can stay a bit longer at the con and maybe actually see something of Seattle.

Also, we got to see some friends from MN whom we haven’t seen since we moved…and I got to obtain my new chainmail dice bag from one of them, who runs a great chainmail crafting/mead brewing business, Honor Bound. 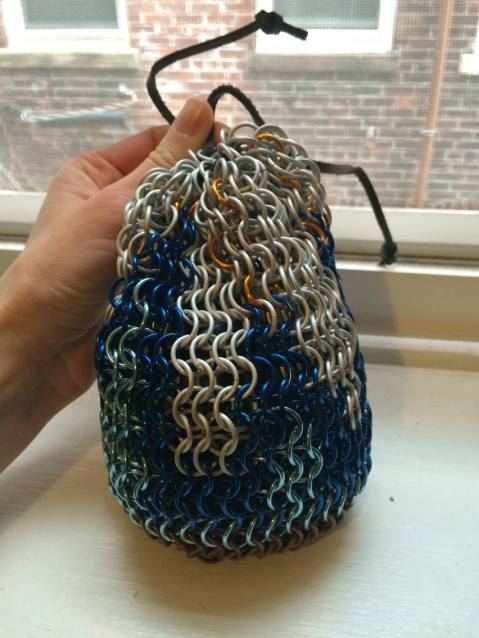 Awesome time!  I should have taken another day off from work to rest up afterward.

As far as con shopping goes…RIP, my wallet. I knew ye well.

In Which I Continue to Be Terrible at Blogging »
« New Adventure Out Now!