Beyond Here Be Cats 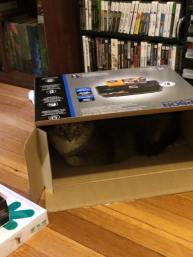 We finally got a printer and now we’re never going to have the heart to get rid of this box.

Not much to say about the week as a whole.  It was kind of a rough week.

Reading The Earth Shall Weep: A History of Native America by James Wilson

Today’s Miscellaneous Historical Fact The Anasazi of the southeast U.S. had ‘apartment’ style houses; originally individual houses linked by terraces, they eventually were built upward as well.  The roof of one level would be the entrance to the next, reached by a ladder.  One of the largest of these complexes was Pueblo Bonito in Chacho Canyon, started around AD 900 and containing eight hundred rooms (The Earth Shall Weep, Wilson).

Reading this book is really eye-opening (very little Native American/indigenous history is covered in most U.S. history classes, and what there is generally revolves around responses to the colonists and settlers) and massively depressing from both a sociological and humanitarian standpoint.  So much history, so many cultures and languages gone, and so many others attacked to the point of near-extinction.  A lot of historical potential ‘turning points’ might have gone differently, leading to a very different U.S.  It’d be a pretty interesting alt-history, but I don’t know that it’s my place to write it.

Not to put too elegiac a tone to this–many of these cultures are still around, and viewing them as something that was only around in the distant past is in some ways part of the problem.  There’s a lot of work being done by people within these communities to support culture and language education, and that’s definitely important.

In broader terms, history isn’t a dead creature; it’s a living thing which we still inhabit.  We ignore it at the cost of ignoring some important lessons, and education in things like history and other humanities shouldn’t be considered a ‘luxury’ or ‘useless.’  History has a lot to say to us, if we care to listen.  (And, on a lighter note, sometimes you come across something like the snail story, affirming that people in the past were just as wacky and full of shenanigans as people today.)